Semanta Modeler offers a powerful script generation engine, which gives you the possibility to translate your semantic database model into a relational database. This script generation engine is a two step process: first it translates your semantic model into a relational model, second it generates a SQL script for the relation model to create the database definition in the target database of choice (at this moment Oracle, Microsoft SQL, PostgreSQL, MySQL and Interbase/Firebird are supported).

Generating a relation model
When translating a semantic model to a relational model, there are three 'problems' which need to be resolved:
Ad 1: Translating the object and attribute names
For all kind of reasons the mapping of the semantic object/attribute name will not always be one-to-one with the original name in the semantic model. For this reason Semanta Modeler has some options to convert the names, which can be configured in the Model properties window (SQL settings tab). 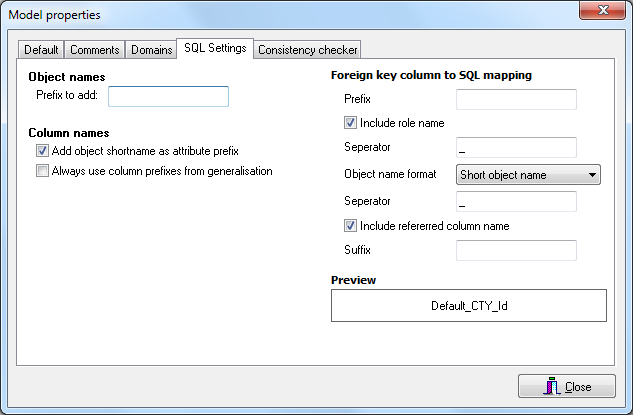 The foreign key column mapping can be configured with a number of options, and offers a quite flexible way of naming your relational columns. The settings provided here are at model level, so will be valid for all foreign keys in the model. In addition to these settings, Semanta Modeler has an option to override the settings at a specific foreign key level. 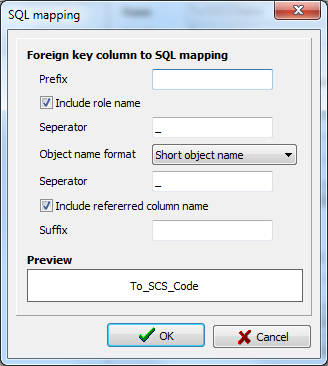 For example this model:

Translates into this relational table (for Microsoft SQL server):

Or this (using different SQL settings):

Using this kind of specialization mapping (into the generalization), the specialization concept is especially useful for the modelling of a type or kind field into a record, which toggles a mandatory check on a set of columns.

The script generator uses the type mappings to generate the scripts. In addition to plain attributes, the semantic model can contain additional attribute types (which have a special meaning). These attributes are the specialization block and the relation. These two attributes require the special handling as described earlier (when translating to the relational model) as these concepts are unknown or different in the world of a relational database.

Generated output scripts
Before generating the database scripts, Semanta Modeler will check the consistency of the model. When errors are found, the export cannot proceed. You can trigger the consistency check manually by using the Check model option from the Model toolbar. This check can generate errors, warnings and hints in order to guide you in creating a correct database model.

Once the model is found to be correct, we can start the generation of scripts. When generating scripts for a full database (creating a new database from scratch), Semanta Modeler will generate a number of scripts for you (which scripts are available also depend on the choosen target database, as not each database supports all concepts): 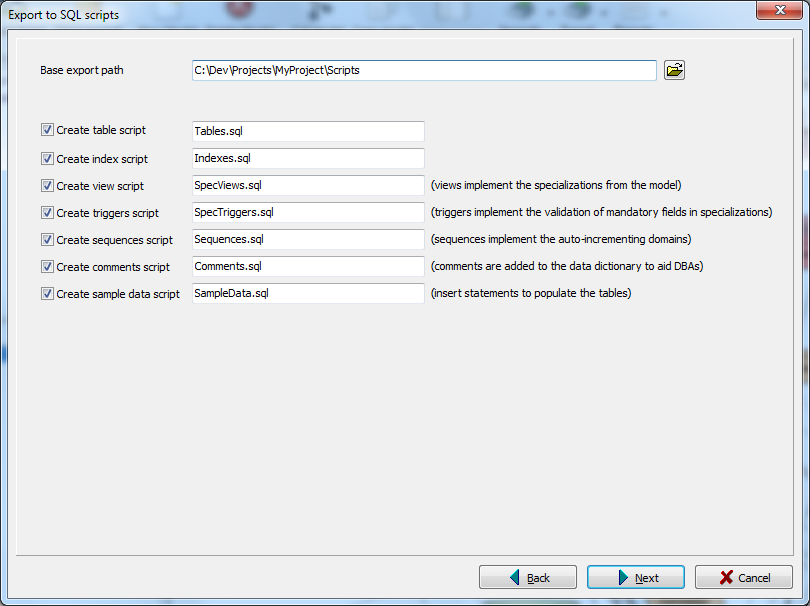 These scripts contain the following:


Full script export versus version migration
When generating a database script, Semanta Modeler offers the option to generate scripts for creating a new database, or to generate a migration script between two versions of the model (so it will migrate the existing database to the new version of the model). Using the latter scripts, it is possible to apply changes to the model to an existing database.

The assumption for the migration script will always be that the current state of the database is 100% equal to the scripts generated by Semanta Modeler for the old version. The aim of the migration scripts is to maintain the existing data as much as possible. As these kind of migrations can become quite complex, not all situations can be handled, but the script attempts to give a very useful starting point.

A last useful tip: breaking a complex migration into several smaller steps (using multiple intermediate versions), will increase the ability of Semanta Modeler to generate a correct migration automatically for you.